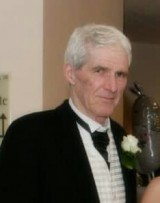 Brother of the late Patsy R.I.P.,

Ramie will be sadly missed by his sister Mary and brothers Martin, Paul, Jimmy, Michael, Noel and Tommy.

Fondly remembered by his brothers-in-law, sisters-in-law, nephews, nieces, relatives and many friends and neighbours.

Funeral Mass on Saturday 23rd Sept at 11am