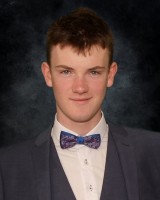 Beloved son of John and Angela and adored brother of Rebecca, Eilís, Caoimhe, and Caoilinn.

Deeply regretted by his loving family, his grandmother Biddy,

Oisín will be sadly missed and fondly remembered by his aunts-in-law Julie, Maura, Teresa and Hilda (Killeen), his uncles-in-law Jim, Hubert, Kieran and John, cousins, relatives and many friends.

Funeral Remains Reposing at the Church of Our Lady of  the Wayside, Inch this Wednesday 4th April from 4 p.m. with Funeral Prayers at 8 p.m.