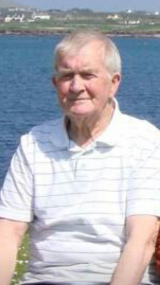 Adored and much loved grandfather of Áine, Conal, Kian, Alana and the late Eoin.

Funeral Remains Reposing in St. John the Baptist Church,Kilmaley on Friday 2nd September from 6 p.m. with Funeral Prayers at  8 p.m.

No flowers by request please.