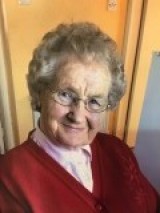 The death has occurred of Margaret, better known as Peggy, Lynch, Shean, Kilmaley

Peggy passed away peacefully at home in her 99th year, surrounded by her loving and devoted family.