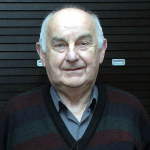 Fr Paddy was a native of Carrigaholt, Co. Clare and was a priest of the Diocese of Killaloe for 63 years.

He was a past pupil of St Flannan’s College, Ennis.

He studied for the priesthood at St Patrick’s College, Carlow where he was ordained on June 10th 1956

His first appointment was in the Diocese of Brentwood in the U.K. in service to the Emigrant Apostolate where he served in Upminister, Greater London for one year and then in 1957 was appointed to Ilford in Essex.
He returned to Ireland in 1961 to become curate in Ruan, Co. Clare.
In 1972 he was appointed as curate in Milltown Malbay, Co. Clare.
His next appointment was in 1989 as Parish Priest of Killimer-Knockerra Parish and he moved to Cooraclare as Parish Priest in November 1993.
He retired as PP on reaching retirement age in 2007 and was appointed Administrator to the parish of Cooraclare.
In July 2008 he was appointed as Priest in Residence to the same parish and continued to work as a priest of the parish until 2018

Funeral Remains Reposing in St Senan’s Church, Cooraclare on Tuesday evening, February 26th from 5.00 to 8.00 pm with prayers at 8.00 pm.