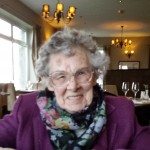 The death has occurred of Bridget, better known as Bridie, Casey (nee Ronan), Kilclogher, Kilmaley – peacefully at University Hospital, Limerick in her 91st year.Wife of the late Tom Casey R.I.P.

Fondly remembered by her nephews, nieces, relatives and large circle of friends.

Funeral Mass on Wednesday (20th Sept) at 11am