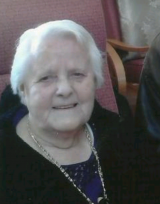 Barbara will also be sadly missed and fondly remembered by her large circle of family, friends and neighbours.

Funeral Mass on Thursday 11th January at 11am