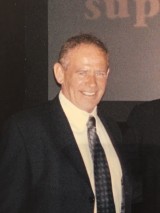 The death has occurred of Anthony, better known as, Tony McMahon, An Cluainín, Kilmaley, suddenly at his residence.

Deeply regretted by his sons Patrick and Michael, daughter Bernadette and their mother Julia,

Tony will also be sadly missed by his sisters Marie (Clancy) and Ann (Lynch), brothers John, Brendan and Daniel,

Funeral Mass on Wednesday 27th March at 11am